Requirements for a minimum slip resistance for tiled indoor wet areas (pool decks, showers, some lobbies, commercial kitchens, etc.) entered the International Building Code (IBC) in 2014 when the American National Standards Institute (ANSI) amended their standard A137.1 to include a minimum value for wet dynamic coefficient of friction. It’s important to know what this means when you are buying tile. The standard presumably will by default be applied to other types of hard and resilient flooring too.

The test in the ANSI standard is sometimes known as the DCOF Acutest, or DCOF Rating test. It uses the BOT-3000E digital tribometer and water with a trace of a specified wetting agent, or “detergent.” The concentration of the wetting agent is a key factor in this test. In 2018, ANSI released the A326.3 DCOF Rating Slip Test, which uses the same test method and was intended to update and replace A137.1. 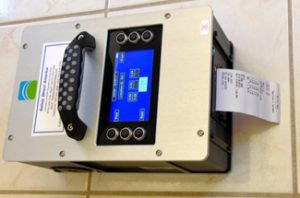 In extensive studies at Germany’s University of Wuppertal, the BOT-3000E was shown to correlate well with human traction when the concentration of the wetting agent was 0.10 percent. Using a wetting agent ensures that the flooring will be uniformly wetted for the test (rather than having isolated beads of water, like a freshly-waxed car hood), and simulates the trace of detergent residue on a typical indoor floor that’s sometimes cleaned with a detergent solution. It also leads to lower values of the measured DCOF, since it makes the water more slippery.

The German study indicated that a minimum DCOF greater than 0.42 had an acceptably low risk of slipping for walking pedestrians. This procedure and safety standard became part of ANSI B101.3 in 2012.

The U.S. tile industry, through Tile Council of North America (TCNA), did their own research and halved the concentration of wetting agent to give higher DCOF values, but retained the same minimum DCOF of 0.42 for ANSI A137.1/A326.3. This had the advantage of making more of their tiles meet the minimum; but it could also mean that many of those tiles were too slippery to meet the 0.42 limit in the earlier ANSI standard, B101.3. “TCNA researchers found on average that 0.60 SCOF measured with de-ionized water generally correlated with 0.38 DCOF when measured with slightly soapy water.” The SCOF test method ASTM C 1028 has been withdrawn by ASTM; it had very poor reproducibility and was also a misleading failure at predicting pedestrian slips.

For that reason, ANSI and TCNA added some 16 factors that the tile specifier must consider. Unfortunately they have given no guidance as to account for these factors. TCNA only states that the relevant ANSI A137.1 section “should be reviewed carefully by anyone involved in the specification process before picking the right tile for the next job.”

So what will you do to “pick the right tile for the next job”? We recommend using the situation-specific safety standards discussed on the reliable slip resistance testing page. Don’t be found negligent by a jury because you didn’t consider the 16 factors that you needed to worry about!

ANSI B101.3 mentions a second, much lower, DCOF limit: 0.30. From 0.30-0.45 is “acceptable – increased probability of slipping. Monitor DCOF regularly and maintain cleanliness. Consider traction enhancing products and practices where applicable for intended use.” Below 0.30, “seek professional intervention. Consider replacing flooring and/or coating with high traction products.”

B101.3 is also less specific about slider preparation for the test, and this can affect the results. The manufacturer of the BOT-3000E recommends, “it is a good idea to perform an initial ‘first pass’ run and discard the result immediately after reconditioning. … This definitely makes a difference in the standard deviation within the group of test samplings.”

Two more things to remember: first, the BOT-3000E is not suitable for testing outdoor flooring because of its low speed; people may be running outdoors, especially when it’s raining. Second, indoor flooring that’s slippery wet can be fine if it’s kept dry.

For reliable slip resistance testing based on real-world slip and fall research conducted around the world, visit SafetyDirectAmerica.com/Floor-Friction-Testing